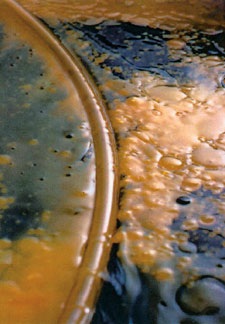 Traditionally, the separator industry has either used overflow skimmer pipes or weirs, or has depended upon and outside removal firm to pump of the oil. While they are inexpensive to use, skim pipes/weirs have inherent problems because there is always oil on the surface of the separator. Oil removal services are effective in removing the layer of oil but they are expensive. They are needed continuously, and therefore, they are an ongoing expense. In either case, there will always be a problem of oil on the surface of the separator.

Problem:
When oil is not continuously removed from the surface of an oil/water separator, several problems occur:

Solution:
Companies have tried a number of methods to remove oil from the separators and discovered that the installation of a “floating tube” oil skimmer with the separating device would eliminate the excess oil. The unit is manufactured by Oil Skimmers, Inc., of Cleveland, Ohio.

The skimmer uses a specially designed floating tube collector, which floats on the surface of the water. Oil adheres to the outside of the closed looped tube, which is continuously driven across the separator’s surface and through a set of scrapers that remove oil. The oil then gravity drains into a collection tank. This movement of the tube draws the oil to itself and assures total surface oil removal.

Both units (the Model 5H is the same as the Model 6V but compact in size for hard-to-reach areas) are designed to operate on a continuous basis while unattended by an operator. The long looped tube is long enough to cover a large skimming area and requires low maintenance.

Results:
Customers are pleased with the results of the attachment of the Model 6V and the Model 5H to their oil/water separators. by using Oil Skimmers skimming units on their separators, plants have saved time and money by not having to use the traditional oil removal methods. Also, the addition of these systems has eased the environmental concern of oil discharge and eliminated te problems of many separators.

The company has representatives through the world who are available to visit a facility, conduct a survey and tube test and offer a proposal.