The U.S. Environmental Protection Agency Performance Track Program is a prestigious program that recognizes the accomplishments of manufacturing facilities that lead the way for improving their facilities’ environmental performance (i.e. reduce air emissions and consumption of water).

Brooklyn Navy Yard Cogeneration Partners L.P. is an elite member of this program. They have been recognized for their proactive efforts to reduce its air emissions and water consumption since April 2005. BNYCP, along with Palmark Inc., the onsite plant Operation and Maintenance Company, believes it is their responsibility to do everything possible to ensure that the plant is environmentally compliant.

Located in Brooklyn, N.Y., Brooklyn Navy Yard is a 286-megawatt plant that produces continuous duty of 220 megawatts of electricity and up to 1,000,000 pounds of steam per hour.

Brooklyn Navy Yard Cogeneration facility’s environmentally friendly power plant has a waste stream, which includes oily water waste that travels to a sump and is then processed via an oil/water separator. The processed mixture empties into the city sewer system and is treated in the nearby wastewater treatment plant.

Due to the specific gravity and surface tension of the oily water waste, oil entering the sump separates to the liquid surface. This oil remains on the surface and is not pumped to the oil/water separators since a low sump level is maintained by a series of floats that turn the pumps on and off. Over time, dirt and particles can combine with the oil turning it into sediment/sludge heavier than water allowing it to fall to the bottom of the sump where it is pumped through the oil/water separators.

The oil/water separators are designed to remove clean floating hydrocarbons. However since the sludge-laden hydrocarbons are heavier than water, they become trapped inside the piping, oil/water separator and auxiliary controls; interrupting the facility’s monitoring equipment and causing increased operating and maintenance costs.

Brooklyn Navy Yard invested in in-plant personnel time and outside contractors to clean the separator and the sump to keep them performing under the New York Department of Environmental Protection’s required hydrocarbon level of 50 parts per million. These protocols were not only costly but also time consuming.

“In an effort to reduce the operation and maintenance costs, we began researching alternative maintenance solutions,” said Andrew Scano, former environmental safety and health coordinator for Palmark at the Brooklyn Navy Yard Cogeneration Facility. “I saw an ad for an Oil Skimmers Inc. oil skimmer and made a call to the sales representative. He had just recently installed an oil skimmer at a nearby Con Edison facility.”

Scano was responsible for regulatory reporting to federal, state and local environmental agencies, and managing operational permits. Scano, who now serves as the plant’s operations manager, arranged for a meeting with an Oil Skimmers sales representative to see the Model 6V oil skimmer in operation at the Con Edison facility. The representative demonstrated how the skimmer effectively removed floating oil with clear, definite results.

Skimming up to 100 gallons per hour, the Model 6V transports the recovered oil to a collection container. The tube automatically adjusts to varying water levels and is flexible enough to be able to wind over and around floating debris. The Model 6V is designed to recover oil 24 hours a day, seven days a week, unattended by an operator.

Within one month of seeing the ad, plant personnel installed the skimmer and saw immediate reduction in hydrocarbon concentration in the wastewater stream leaving the plant. It went from a continuous 15 to 25 parts per million samples to zero.

“The hydrocarbons are now virtually undetectable,” said Scano. “We also saw the scum layer disappear and the water became clearer.”

Scano took samples of the wastewater stream and sent them to a New York Certified Lab, which confirmed a very low level of hydrocarbon presence. Findings from the facility’s online continuous hydrocarbon analyzer and the lab results confirmed that the oil skimmer is the reason for the wastewater’s improvement.

After being in place for less than 20 months, Brooklyn Naval Yard saw a substantial derease in maintenance costs. The plant has saved about $30,000 to $40,000 annually between in-house and contractor labor, and replacement parts for monitoring equipment.

“We used to spend about four to six thousand dollars every four months to have the sump pumped and skimmed, and another few thousand dollars to have the separator cleaned by contractors,” said Scano. “We also used to have a maintenance technician spend several hours per week cleaning and monitoring the equipment to maintain accuracy.”

Now, Brooklyn Navy Yard has significantly reduced the annual operation and maintenance cost which only consists of routine cleaning of the skimmer, monitoring equipment and oil/water separators.

“Conventional methods of pumping oil/water mixtures are much less efficient than using an oil skimmer. That’s why we bought into the technology,” said Scano. “It’s an established technology that works effectively with minimum maintenance.”

According to Scano, the positive feedback from the plant’s ownership (Delta Power) has been overwhelming. They are pleased with the efforts made by plant personnel and believe that installing the oil skimmer further demonstrates that the plant is well deserving of the EPA’s Performance Track Program membership. The New York DEP also is equally pleased with the reduction of hydrocarbons in the wastewater stream and the plant’s proactive efforts in making a difference.

“I think people in the industry need to be aware of different alternatives for reducing hydrocarbons,” said Scano. “We took an idea from the wastewater industry and applied it to the power industry. This technology goes across industry boundaries. It’s about being open to new technologies and learning how to apply them.” 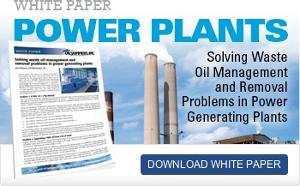