On a snowy afternoon in late December, as workers were shutting down machines and heading out the door to enjoy the Christmas holiday, a manufacturer of corrugated containers, displays, and cartons received notice from the City that their plant was under environmental audit. The plant's discharged wastewater regularly exceeded the Fats, Oils, and Grease (FOG) standard, explained the notice, and if the company couldn't come up with a solution, further action would be taken, including fines and surcharges.

The prospect of stiff penalties from local environmental authorities was daunting, not to mention an unwelcome holiday headache. The fact that the company had a wastewater problem was not news to the general manager and operator of the facility- but with the City ramping up its testing requirements and threatening to impose ever-increasing surcharges, it was time to take a closer look.

“We installed an oil skimming system years ago and made modifications and improvements along the way,” explained the general manager. “But with our machinery aging and production growth continuously on the rise, there was more water and more oil, and the system we installed years ago needed to be expanded…somehow.” 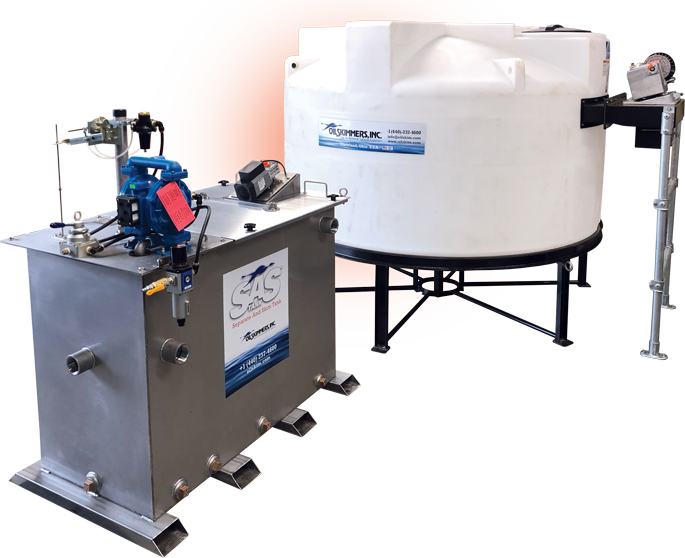 As shipping cartons and other products advanced along the assembly line, corrugators, rollers, die cutters, scoring machines, trimmers and presses were washed down, producing a waste stream that flowed to a collection sump. Lubricating oil from the machinery and starch from the manufacturing process collected along with the wash water, necessitating removal of oil before the water was discharged to the city sewer. In previous years the company had installed an Oil Skimmers, Inc. Brill® Model 6V oil skimmer to remove oil in the sump. That system worked perfectly well for many years. Because of his familiarity with, and the success of the Model 6V tube-type oil skimmer, when the manufacturer needed to expand their treatment system, they contacted Oil Skimmers, Inc. to assess current processes and challenges, and propose a solution.

The Oil Skimmers, Inc. team analyzed the wastewater flow process from origin and quantity of the water, oil and starch, to equipment and facility washdown processes, to collection in the sump, to final discharge. In addition, the team gathered and documented operational data including the size and processing capacity of the sump, the frequency, flow rate and volume of wastewater filling the sump, and the content, frequency and volume of discharge to the City sewer.

Too much flow = rapid discharge and not enough treatment

After crunching the numbers and scrutinizing the data, it was discovered that the Model 6V in place was in good working order and operating perfectly well as designed. The problem was that the company’s production output had grown and with it their wastewater output. The sump had been designed and sized based on the average daily flow rate at far lower levels of output, and not the higher flow rates caused by the current higher levels of output. Essentially the growth of the company outstripped the capacity of the sump. The sump was now undersized for current levels of production, especially in instances of maximum wastewater inflow, and thus did not provide adequate area for sufficient oil/water separation and removal of FOGs before the wastewater was discharged to the city sewer.

What to do? Solution demands teamwork and innovative design

There were a lot of eyes on the project. The involvement of the City and local EPA dictated that the solution had to be properly researched and documented, technically sound, and in line with all local codes and regulations governing the installation and modification of industrial water treatment equipment. In addition, the company had constraints and limitations in its factory floor space, as well as their capital budget. Working within these constraints, the Oil Skimmers, Inc. engineering team developed and recommended a new oil removal system suited to the current maximum volume and flow of the wastewater stream, while accommodating plant space restrictions and budget limitations. Once company management approved the proposal it was presented to the City and the local EPA.

The general manager noted, “The team at Oil Skimmers worked with closely with our people and the City and State regulatory agencies to see the plan through all the approval levels internally and externally and offered support at every step along the way”.

A unique challenge in designing a treatment system for this facility was that the maximum flow rate occurred at sporadic intervals, rather than in a constant stream throughout the day. Thus, simply installing a standard oil water separator capable of handling the maximum potential flow was deemed impractical, too space consuming, and cost prohibitive. Instead, Oil Skimmers, Inc. designed a multistage system. Stage 1 focused on regulating the inconsistent, surging flows of wastewater. At this stage the system managed the inflows surging up to 50 gpm allowing time for preliminary separation of oil from water before the system metered out a more controlled and lower flow of wastewater to the next stage of oil removal. Stage 1 featured an integrated Model 5H Brill® tube type oil skimmer to actively remove any oil that rises to the surface at that Stage.

In stage 2, the wastewater flowed into Oil Skimmer’s, Inc. SAS® Tank oil water separator to undergo its next stage of treatment. This type of separator features an onboard tube type oil skimmer for continuous, “active” oil removal as well as coalescing media. The system is sized to meet the flow rate, oil droplet size, temperature, weight and quantity of the waste oil. As the wastewater enters the separator, it flows through coalescing media which causes any remaining oil droplets above a certain size entrained in the water to combine together and rise more quickly to the surface where an Oil Skimmers, Inc., Model 1H oil skimmer actively removes it from the surface.

In the final stage of the system, an Oil Skimmer’s, Inc. decanting systems provides a final process to separate any remaining water from the oil that has been removed in the process. This ensures that the waste oil is free of water so that the company is not paying to have water removed, only oil. Waste oil free of water is less costly to recycle and, in some cases, has value.

The importance of Active Oil Removal™

“Active oil removal” is a key feature of Oil Skimmers, Inc. SAS Tanks and allows them to excel where many oil water separators fall short – waste oil removal after oil water separation. Traditionally, separators feature passive oil removal methods such as slotted pipes or overflow weirs that are intended to allow surface oil to overflow and drain to a collection vessel. These methods require monitoring and manual adjustment, demanding time and labor from maintenance personnel. If left unmonitored which most seem to be, a weir or slotted pipe set too high can cause a layer of oil to build up on the surface, causing a host of other maintenance and performance problems, including:

Conversely, if a slotted pipe is set too low, too much water escapes with the oil, defeating the purpose of the separation system, allowing too much water in the oil waste stream and thus driving up the cost of haul away and recycling. It’s expensive enough to have “pure” waste oil hauled away, you should pay even more to have water hauled away with it.

“Active oil removal” with a tube type oil skimmer is a 24/7 sentry guarding the performance of an oil water separator, eliminating these concerns, minimizing costs, and maintenance requirements and in general keeps the oil water separator performing at its peak efficiency.

Once all the approvals were obtained from the various government agencies, the packaging plant’s team issued a purchase order, and the Oil Skimmers, Inc. production department built and delivered the system within the proposed time period. The Oil Skimmers, Inc. team provided initial on-site support, after-installation support, as well as ongoing technical consultation. Oil Skimmers, Inc. technicians ensured the oil water separator and oil skimmer systems were operating as designed – at both average and maximum flow rates- and provided complete operational instruction and training to the customer.

The complete oil removal solution and all system components were designed to fit within the tight confines of a preexisting building designated for the company’s water treatment operations. The space saving, cost effective multi-stage treatment process designed by Oil Skimmers, Inc. successfully regulates the flow of the wastewater, separates oil from water, removes oil from the surface of water and ensures the water discharged is well within the City’s and EPA’s regulatory standards – eliminating the company’s concerns regarding the potential of fines or surcharges.

A manufacturer at ease, and on with operations (and the holidays)

Exactly one year later, with another holiday vacation approaching, the general manager watches his workers shut down their machines and file out the door. Though the plant's wastewater treatment system has been operating without a hitch, the prospect of another unwelcome holiday surprise keeps him seated in the office just a moment longer than usual. As the business day ticks to a close, he breathes a sigh of relief, flips off the lights and heads out the door, knowing his oil removal system will shoulder the heavy holiday workload.