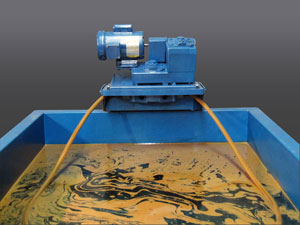 For Bluffton Aeration Service Inc. (BASI), purchasing an oil skimmer was more than a cost-effective method for recovering waste oil – it has been invaluable in reducing costs, generating revenue, and attracting new customers.

BASI, located in Bluffton, OH, is a growing environmental service company that serves a variety of markets, ranging from industrial to municipal and residential. Terry George is a sales manager at BASI and has been with the company for three years. He learned the business from the bottom up, serving as a vacuum truck driver. Last year, he was given the opportunity to try his hand at sales – a move that proved both fruitful for him and BASI.

One day in October 2006, George was reading a trade publication and noticed an advertisement for oil skimmers. The advertisement sparked an idea that made him suspect that an oil skimmer might be helpful for an account he had recently landed. The new account was an area forge plant that hired BASI to pump out an oil/water mixture. Soon after landing the account, the owner of BASI, Rob Strahm, and George had a discussion about oil skimmers and if a skimmer would benefit the company. Strahm suggested that George look into it further. George researched oil skimmers to determine if purchasing one would be a cost-effective step for BASI and its new account.

In the past, BASI stored client’s oil/water mixtures in a collection tank that allowed the oil and water to separate. Since they had no efficient method of oil removal, BASI paid someone to haul away both the oil and water, increasing their disposal costs. Knowing that the new forge plant account yielded more waste oil, BASI decided it needed a new method of removing the oil to reduce costs and improve processes.

“I researched various oil skimmers and realized that we could use one and adapt it to do what we needed it to do,” said George.

Based on George’s research, BASI decided to purchase a floating tube skimmer from Cleveland-based Oil Skimmers Inc., a manufacturer of oil skimmers and oil skimming equipment.

“Up until when we landed the forge plant account, we never had to deal with removing the amount of waste oil that the forge plant produced. But now that we have the oil skimmer, we’re able to take on additional clients that require the same type of service,” said George.

Now, after the oil and water have been separated, the floating tube skimmer skims the oil from the top of the water and BASI sells the oil that it has hauled away, leaving the water.

The floating tube skimmer that BASI purchased is fully automatic, compact and is designed to be used in hard-to-reach areas. The skimmer’s collector tube snakes over and around any floating debris and adjusts to changing water levels, and thus is not affected by waste in the water. As oil adheres to the tube, the tube is drawn into the skimmer where the oil is removed by scrapers. The clean tube is then returned to the water to collect more waste oil.

BASI chose the horizontal model because it needed to fit on a small manhole opening of the collection tank. George customized the application by building a stand and mounting the oil skimmer to it, so that the skimmer can sit up high enough above the manhole. The waste oil then falls into the oil skimmer’s collection pan, where a drain line runs out of it over to a neighboring 5,000-gallon waste oil collection tanker.

“The only gain in cost was the initial investment in the oil skimmer, which was immediately offset with the second load of oil that was picked up,” stated George.

George added, “In the one year since buying the oil skimmer, it has skimmed approximately 15,000 gallons of waste oil. When we didn’t have the skimmer, I saw the waste oil collection tank fill up only once in the three years I’ve been at BASI.”

Since the waste oil collection tank was laden with water before the floating tube skimmer was purchased, BASI paid a high cost to dispose of the oil. Now that BASI uses an oil skimmer, the amount of water in the oil is minimal, increasing its value to the waste oil broker and thus increasing BASI’s revenue.

“Before the skimmer, we would usually make 15 cents per gallon of disposed oil because of the amount of man/hours needed to separate the oil and water. Now, our broker just hauls away skimmed oil for over three times more per gallon. Also, the disposal cost of the water has been reduced. This cost savings is passed onto our customers,” said George.

George also likes how he can leave the floating tube skimmer unattended, so he can tend to his job.

“I can leave the skimmer running 24/7 without worrying if it’s going to shut down. In our application, we pick up a lot of trash, such as broom bristles and water bottles, with the waste oil. We don’t have to worry about the trash affecting the skimmer’s ability to function,” said George.

The floating tube skimmer not only helped increase BASI’s revenue, it also positioned BASI to grow as a business.

“Since using the oil skimmer, we’ve tripled the size of this portion of the business. With this increased capacity, we’re now better positioned to go after new clients with the same needs,” said George. He also predicts that, as this service continues to grow for BASI, the company will purchase another oil skimmer.