Power Plants Use Oil Skimmers to Prevent Contamination from Spills 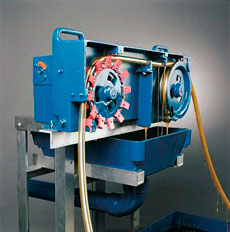 Most hydroelectric plants designed in the 1960s were built with a station drainage sump that collects all drainage from the plant. As designed, float switches activate sump pumps that discharge liquids directly into the tailrace. The system cannot distinguish between types of liquids, so in the event of an oil leak, oil in the sump could be released into the tailrace. Modern environmental-compliance specifications don’t allow this and require a retrofit solution.

Power plants have taken the initiative to make several improvements to eliminate this potential problem. One fix has been the installation of Model 6V oil skimmers for the sumps.

The districts have also plugged a number of floor drains, and installed speed bumps, similar to those used in parking lots to slow traffic, for spill containment. Additionally, the plants make a cart-mounted skimmer is available to serve as a mobile spill-control unit. Plans call for oil detectors that will automatically turn off the sump’s pumps and turn on the skimmer.

The oil skimmers being used feature a floating tube-type collection system, and can recover any oil that may have entered the sump through the plant’s drainage system. A polyurethane tube floating on the sump surface attracts oil while a motor-driven pulley pulls the tube past two scrapers that remove the collected oil. The clean tube is then returned to the sump. The oil drains into a storage barrel and is later placed into a waste oil sump for proper disposal. The skimmers can collect up to 100 gallons of oil an hour.

In one example, a district team suggested that most of the plant’s floor drains be plugged to prevent hazardous substances such as oil, battery acid, and cleaning solvents from reaching the drainage sump. With unplugged drains, the substances would freely mix with the sump liquid. All of that liquid would then be considered a hazardous waste.

The plugs are removable; if a spill involving water or another non-hazardous substance occurs, plant personnel can remove the plug and allow the fluid to drain into the sump.

Containment of spills becomes especially important after floor drains are plugged, and in this case plant personnel addressed this by using rubber automotive speed bumps for spill containment. The speed bumps are placed in, or in front of, doorways to keep liquids from spreading. The speed bumps – about 4 inches high – permit equipment to be moved about the plant and present a low-threat tripping hazard for plant personnel.

As a result of the modifications, the plant personnel are now better able to respond to an oil spill than in the past.