Oil Water Separator to Separate and Skim Oil from Stormwater 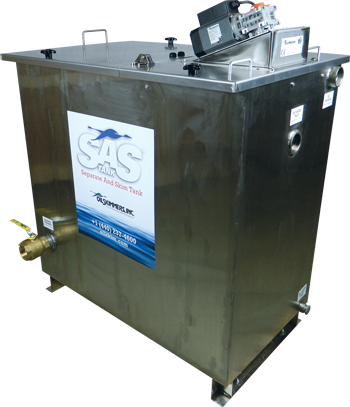 In suburban Chicago, a metal fabrication plant stamps, welds, turns, cuts, assembles and finishes heavy metal and structural steel. Some of the larger machines and equipment used in these processes have substantial foundations that sit below grade so operators can work with the material at comfortable normal floor heights. Since these foundation “pits” in the 60,000 square foot facility sit below the water table, heavy rain events throughout the year can cause some of the pits to collect water, the most vulnerable being the press pit. Another equally easy entry-path for flood water to collect is the below grade loading dock designed for easy access for loading and unloading material from trucks.

“Water is an issue,” explains the plant manager. “We get some flooding, but it's pretty much impossible to predict exactly when it'll hit, and each year it’s different.”

Historically, a 10 gallon-per-minute sump pump was used to remove water from the pits and deliver it to the facility’s parking lot, where it flowed into the nearby storm drain. In recent years, though, as production ramped up, lubricant oil from the machinery and oil used to coat and protect metal ended up mixing with the water in the pits. Oil in the water became an issue that required action.

For some time, the plant manager had been concerned that the pit and flood water contained measurable amounts of oil that were being discharged into the storm drain which connects to the storm water sewer system, and ultimately a local river. But when the Public Works division of the village alerted local manufacturing of upcoming audits and regulatory measures that focused on potentially harmful wastewater discharges from factories, he knew it was time to act.

“We wanted to do the right thing, both for our business and the community,” he said.

Realizing the current system was unsustainable from an environmental perspective, a search for “oil removal solutions” led the plant manager to contact Oil Skimmers, Inc.

When the Oil Skimmers, Inc. team arrived on-site to evaluate the situation, they determined that the pumping system in place was adequate and operational. The main objective was to come up with a cost-effective process to separate the oil from the water before discharging it with minimal rerouting and plumbing.

Utilizing the existing pump and oily water transfer line, the Oil Skimmers, Inc. team designed and installed a SAS (Separate-And-Skim) Tank, an oil water separator. The wastewater is pumped from the pits into the SAS Tank, where coalescing media in the tank encourages oil to rapidly separate from water and rise to the surface. The SAS Tank oil water separator was designed to operate at the flow rate of 10 gallons-per-minute served by a pump, with an overall footprint that fit nicely into the floorspace available in the facility.

Inside the SAS tank, the oily water passes through the media and reaches the surface. At that point, an integrated Model 1H Brill® tube type oil skimmer “actively” removes the oil. The compact 1H features a Free-Floating Collector Tube™, which floats freely on the surface, continuously removing the oil. “Active oil removal” is one of the features that separates Oil Skimmers, Inc. SAS Tanks from traditional oil water separators. To function properly, traditional oil water separators are maintenance intensive in part because they feature manual, or passive means of oil removal, usually by way of a slotted pipe or overflow weir. If not continuously monitored and manually adjusted, these passive methods can cause oil to build up on the surface of the tank. Oil build up leads to a host of issues maintenance and performance issues in a typical oil water separator, including bacteria growth and foul odors. The oil build-up can also crowd the oil water separation chamber which over time can compromise performance of the media and cause the separator to chronically underperform to the extent of allowing oil to escape with the “clean” water effluent. Active Oil Removal is designed to prevent oil build-up to keep the separator running most effectively and efficiently with less maintenance. 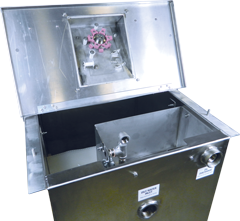 The SAS Tank designed for this application includes a decanter to remove any water collected with the oil by the Model 1H oil skimmer. Essentially, the oil recovered by the skimmer drains into the SAS Tank’s onboard decanting system. That decanter is designed to ensure that any water collected with the oil gets separated and routed back to the tank. The decanter is an important feature as water-free oil maximizes the value of the waste oil and minimizes the haul away cost. Indeed, post-installation evaluations at the fabrication plant have shown that very little water is present in the separated oil, and this result is consistent across a variety of rain and flood events. The recovered oil is stored on-site in 55-gallon drums, that when filled are picked up and hauled away by a third-party.

Doing the right thing, and back to stamping, welding, and assembling

A year after installation, the Oil Skimmers, Inc custom-built SAS Tank continues to keep the metal fabrication plant in compliance with local environmental codes. When storms hit, their pumps move water out of their facility to the Oil Skimmers, Inc. SAS Tank oil water separator which operates 24/7.

“This is the solution we hoped for,” concludes the plant manager. “It's really paid dividends, both for our growing business and the local environment. With the Oil Skimmers, Inc SAS Tank with active oil removal there is zero concern that oil will contaminate the environment.” 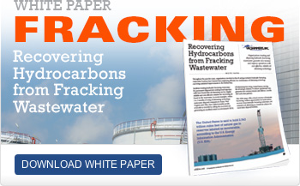