The Importance of Active Oil Removal with Oil Water Separators

“Active oil removal” is a key feature of Oil Skimmers, Inc. SAS Tanks that allows them to excel where many oil water separators fall short – waste oil removal after oil water separation. Traditionally, separators feature passive oil removal methods such as slotted pipes or overflow weirs that are intended to allow surface oil to overflow and drain to a collection vessel. These methods require monitoring and manual adjustment, demanding time and labor from maintenance personnel. If left unmonitored which most seem to be, a weir or slotted pipe set too high can cause a layer of oil to build up on the surface, causing a host of other maintenance and performance problems, including:

Conversely, if a slotted pipe is set too low, too much water escapes with the oil, defeating the purpose of the separation system, allowing too much water in the oil waste stream and thus driving up the cost of haul away and recycling. It’s expensive enough to have “pure” waste oil hauled away, and even costlier to have water hauled away with it.

Active oil removal with a tube type oil skimmer is a 24/7 sentry guarding the performance of an oil water separator, eliminating these concerns, minimizing costs, and maintenance requirements and in general keeps the oil water separator performing at its peak efficiency. 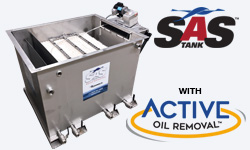 Need to separate and remove oil from water at your facility?

Read about applications like yours that use oil water separators to efficiently and effectively remove oil from water.