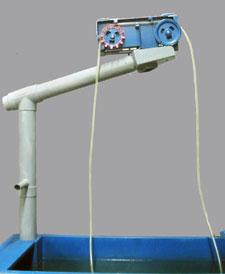 PROBLEM: The biggest challenge confronting Rohm & Haas Corp. in building a wastewater plant for its chemical facility in Elma, WA, was meeting Washington State Department of Ecology limitations on boron of 5 ppm. The Elma plant manufactures sodium borohydride, a versatile chemical used in a variety of applications ranging from the generation of sodium hydrosulfite for reductive bleaching of wood pulp, to the purification of process chemicals. It is used as a pollution control method, to remove heavy metals from wastewater.

LIMITATIONS: Some complications contained in the Department of Ecology Waste Discharge Permit are routine, such as BOD, COD , suspended solids, and total oils. Others are specific to the Elma plant, such as boron, zinc from cooling tower treatment, and the ratio of the plant’s flow to the residential discharges. In addition, both the Washington State Department of Ecology and EPA required the plant to submit an “Oil Spill Prevention, Control and Countermeasure Plan.”

Solution: The first step in water pollution control at the Elma plant is collecting and impounding all wastewater from the plant. This is accomplished with three underground sewer systems.

Oil is removed with a Model 6V oil skimmer. The skimmer is designed to be used in either basin and has operated effectively with varying types of oil. The unit operates continuously, skimming oil from the surface as it enters the basin. There is no chance for accidental discharge.

A closed loop of a specially formulated flexible tube floats on the water surface. Oil adheres to its surface, but water is repelled. The skimmer continuously draws the oil-covered tube through scrapers, and returns the clean tube to the water’s surface to gather more oil.

The skimmed oil flows by gravity through the mounting system or a trough to the storage tank. The flexible, floating collector tube is able to snake over and around floating debris to reach the floating oil. It floats up and down with varying liquid levels. The flexible tube flops so that it breaks up crusted oil or grease enabling it to adhere to the tube.

The original plant design called for pH adjustment with sulfuric acid. A circulation system was installed to permit the addition of concentrated acid to the recycle stream from the basin.

Shortly after plant start-up, Rohm & Haas initiated a cost-savings project to use CO2 rather than sulfuric acid for neutralization. In addition, the potential for over-neutralization is reduced, as the minimum possible pH using excess CO2 is about 6. The source for CO2 is a waste gas stream from the hydrogen-generating unit, less than 100 feet from the effluent basins. A sparge nozzle was installed at the bottom of each of the basins to receive the waste gas stream, which is piped directly from the hydrogen plant.

The system uses a flow-through pH sensor and pH transmitter/analyzer to control the amount of CO2 sparged. The pH sensor measures the pH of the flowing aqueous fluid, and in this case, is installed directly in the stream to the holding basins.

The sensor consists of a flow chamber, glass and reference electrodes, temperature compensator, and an ABSjunction box containing a preamplifier. These components are mounted on an ABS back-plate which is clamped to a 2-inch pipe.

Since the signal from the sensor is preamplified, the transmitter/analyzer can be located as far as 3 miles away from the point of measurement. Signal transmission requires only an ordinary four conductor shielded cable.

Non-interacting zero and span controls are used to adjust the output of the unit to any desired range within 0 to 14 pH. This range may involve a span as narrow as two pH units anywhere on the 0-14 pH range.

The system requires evaporation as a final control step to meet the 5 ppm limit on boron in the effluent. Based on the operating economics, Rohm & Haas chose a two-stage Spray-Film® vapor compression evaporator. This unit concentrates both process and storm water to the 15-20% total solids range.

This type of evaporator has distinct advantages when handling low to medium boiling point elevation solutions. Energy usage is exceptionally low – typically only 40 Btu per pound of water evaporated.

The solution to be concentrated is sprayed over heated tube bundles and is partially vaporized. The liquid that does not vaporize is re-circulated for further concentration. The vapor is compressed in a vapor compressor and returned to the evaporator module. Here it condenses on the inside of the heating tube bundle, thus causing vaporization of the recirculating solution.

The evaporator concentrate is collected in one of several fiberglass reinforced plastic (FRP) storage tanks. The composition of the concentrate is primarily sodium carbonate (sodium sulfate when acid neutralization is used) and sodium borate. When sufficient quantity of concentrate has been collected, it is trucked to one of two firms licensed for waste disposal. It is interesting that one of these firms further concentrates the sodium borate and sodium carbonate for use as an additive in commercial fertilizer.

The second area of pollution control involves the system of dikes and curbs around storage tanks, process equipment, product loading area and oil unloading area. All are designed to contain the contents of the respective vessels in the event of a tank rupture or major spill.

Results: Rohm & Haas used evaporation equipment to meet the tight specifications on boron of 5 ppm or less in wastewater effluent. Wastewater processing also includes oil removal to less than 50 ppm and pH adjustment to the 6.0-8.5 range.

Since use of heavy metal compounds in cooling water treatment was restricted, Rohm & Haas substituted a phosphate-based corrosion inhibitor for the commonly used zinc-based system. During the first two years of operation, corrosion rates have been acceptable, ranging from 1 to 2 mils per year.

Rohm & Haas Corporation was awarded one of six State Environmental Excellence Awards for “innovative, state-of-the-art pollution controls” at its Elma plant. Winners were selected by the Washington State Ecological Commission from a number of nominations. Rohm & Haas was nominated for the award by Elma city officials who pointed to Rohm & Haas’s “cooperative, good neighbor attitude” in making the nomination.

Rohm & Haas actively sought to achieve a high degree of pollution control in the planning stages for the Elma plant. Although many of the accomplishments at Elma were preceded at Rohm & Haas’s plant in Danvers, MA, some systems installed were totally innovative and required advancements in state-of-the-art technology. Spill control measures at the plant are exemplary, and serve as a model for others in the industry. The Washington Department of Ecology commended Rohm & Haas for having the most comprehensive system in the area.