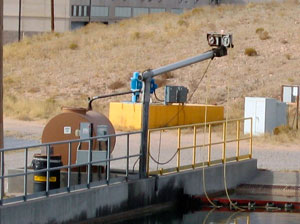 Environmental compliance is a major concern and challenge for the recycling industry. There are few recycling industries that face a stiffer challenge than auto recyclers. Vehicles that were once abandoned have become a valuable commodity. Junkers are now being crushed, shredded and recycled to make new steel. While autos contain a lot of valuable and reusable metal, they also contain substances that can create environmental problems.

PROBLEM: Atlas Auto Crushers in Warren, OH is a successful family-owned business that converts old Junkers into useful scrap that is eventually sold to local steel mills. Brothers Martin and Scott Wilhelm took over the enterprise from their father and have seen the volume of business grow steadily. Every day peddlers drive into the yard, their pick-up trucks loaded with throwaways.

After Atlas Auto Crushers buys a junk car, it is dismantled. The wheels, tires, battery, transmission and engine are removed and stacked separately. A huge press then flattens the shell of the stripped down Junker. With some 2,000 lbs of pressure per square inch, the press reduces the car to a pancake only a foot or so high. A pay loader deposits the flattened car onto a stack of compressed vehicles. Eventually, this mountain of scrap is loaded onto flatbed trucks and sold to shredders for further processing. The removed components become separate mountains at the back of the Wilhelm’s four acre lot.

Even though they are drained before removing, the engines often contain fluids, such as oil and other liquids. Even after the parts are carefully emptied and stacked, residual fluids leak out. In the Atlas lot, this leakage over time threatened to spread out beyond the confines of the lot. There was a risk that oily wastes would seep into a nearby creek and create an environmental risk.

The Environmental Protection Agency closely monitors industrial activity for environmental compliance. “Being as close as we are to a steel mill, we knew that our promptness to comply would be closely watched. We had to come up with a good solution, fast,” says Marty Wilhelm.

SOLUTION: Atlas installed a Cantilever Mounted Oil Removal System with a Model 6V Brill® oil skimmer to remove oil from the wastewater. The Wilhelms outlined what they needed to resolve their oily waste problem. They wanted a system that was uncomplicated, dependable and required no supervision or maintenance. “A mountain of transmissions sits on concrete that is so oily and slippery that it is difficult to walk on. We didn’t want to have to struggle out to repair or adjust or watch over a machine at the far end of our lot. We wanted a system that we could just set up and start and walk away from with no headaches and no hassles.”

After reviewing their options, the Wilhelms chose the Model 6V waste oil recovery system manufactured by Oil Skimmers, Inc. of Cleveland, OH. The system that Atlas bought included a winterization package, a custom option which assures that oil will move in the coldest Midwestern winter. The winterization package heats waste oil that would normally solidify and keeps it in a fluid state, maximizing its removal.

The Atlas four acre lot slopes gradually downhill with concrete pads and curbs to control flow. At the bottom end of the lot, the Wilhelm brothers built a large, in ground, concrete retaining tank, divided into two, connected sections. Oil wastes are funneled into one of the sections; the second section is for storm overflow.

The Model 6V is mounted on an 8-foot cantilevered boom over the oil collecting section. The specially formulated polyurethane tube dips into the oil wastes. The tube floats on the surface of the water, adjusting automatically to changing water levels. Oil, but not water, is attracted to the outside of the tube. The oil-laden tube is drawn up through blades that clean off the oil. The cleaned tube returns to the water surface to collect more oil. The collected waste oil is decanted into a 1,000 gallon tank and eventually is recycled.

“For us, one of the major benefits of the Oil Skimmers Model 6V is how much water the system removes from the waste oil,” says Marty. “Getting rid of as much water as possible is a real advantage, especially in winter. Right now, we pay to have our waste oil taken away for recycling. The skimmed oil is just about water-free when it flows into our collection drum. I feel better knowing that we’re not paying someone to take away water. Since the Model 6V is mounted on a boom, we can easily swing it over the second section of the tank when we need to clean it up.”

RESULTS: “We bought our Model 6V in 1988 and we’ve never had a problem with it,” says Marty. “We came into compliance with EPA regulations and we continue to be in compliance, even though our business is growing and our skimmer has to work a little harder. It’s an efficient, reliable and maintenance-free system that’s really helped us. The Model 6V oil skimmer is one of the best investments we ever made.”