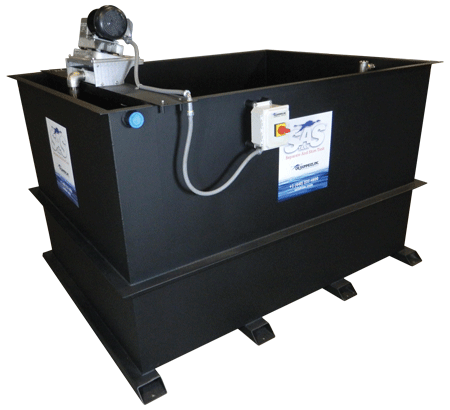 A manufacturer of plastic bins used in agricultural and industrial applications fabricates their product with large injection molding machines that are set partially down in pits, a few feet below grade. Since the start of operations, the manufacturer had been plagued year-round by water leaking into the pits from the mold cooling system, and in the spring, ground water intrusion compounded the issue. Some months they dealt with up to 10,000 gallons of water entering the pits. When oil leaked from the hydraulic driven machinery or a line carrying hydraulic oil broke, oil was added to the water, creating a disruptive, expensive, and unsustainable scenario.

The manufacturer was spending $130,000 per year in disposal expenses, and relying on a makeshift, roundabout solution that involved dropping a hose into each of the pits and pumping the water and oil accumulation into several IBC totes. The totes were then transported to a storage area until a third-party disposal company came to pump them out, charging a rate of up to $1.50/gallon plus a transport fee. These costs were nicking away at the manufacturer's bottom line, not to mention the man hours (and hassle) expended to pump out the pits and move the totes.

“We were at our wits end,” said the facility manager. “Oily water should have been a side issue at our plant, but some days it seemed like the main one. It was an expensive distraction from our main focus of getting our bins out to market.”

In seeking an on-site treatment solution, the manufacturer determined the addition of an on-site oil water separator might be beneficial. When researching options, they realized that their practice of treating the water in large batches made a flow-through separator (one designed for a continuous flow) infeasible. They instead considered installing a large holding tank, then adding an oil skimmer to remove the oil as it naturally separated and rose to the surface. Some internet searching led the facility manager to reach out to Oil Skimmers, Inc. for some expert consultation. After some discussion about the challenges and concerns with the application, he was delighted to learn that not only did Oil Skimmers, Inc. have the perfect oil skimmer for the job, but they could provide a whole system with an oil skimmer integrated with a tank, providing a complete, single solution for each of the challenges at hand, containment, batch treatment, oil water separation and oil removal.

Tackling the problem with a “full-package” offering

The Oil Skimmers, Inc. team worked with the manufacturer on a comprehensive, long term, and cost-saving solution.

The customer installed plumbing in the pits creating an oily water transfer line to a 6 x 8 x 5 ft. SAS™ (Separate-And-Skim) Tank manufactured by Oil Skimmers, Inc. The SAS Tank is located in an indoor service bay area. With the installation of the SAS Tank, the pits can be emptied with a single pump via the flip of a switch, eliminating the need for man hours to be expended on pumping. Whereas the original method required the efforts of several personnel, the new setup can be operated with just one worker.

The Oil Skimmers, Inc. engineering team designed the SAS Tank to address the amount of water to be treated, balanced with the space available on site. The SAS Tank receives the wastewater and allows the oil to separate and rise to the surface where it is removed with the integrated Model 5H Brill® oil skimmer. The SAS Tank can hold and treat up to 1500 gallons of water.

The SAS Tank’s integrated tube-type oil skimmer, a Brill® Model 5H, removes oil from water in the separation chamber. The 5H features a Free-Floating Collector Tube™, which floats on the surface, continuously removing the oil after it separates, rises, and floats on top of the water. The oil adheres to the outside of the tube and is scraped off inside the skimmer. The recovered oil drains into the SAS Tank’s onboard decanting system which ensures any water collected gets routed back to the application.

When the oil is successfully removed from a batch of pit water, the water left in the SAS tank is discharged to the city sewer, after which another pit can be pumped into the tank. On average, six 275- gallon totes of oil are separated each week from process water. This oil is handed off at no charge to a third party, or depending on the price of oil, there may be an opportunity to sell it, creating a new revenue stream for the manufacturer.

Getting back to business

In the end, Oil Skimmers, Inc. was able to assist the manufacturer in solving a costly and time-consuming wastewater problem in their facility. By offering a “full-package” solution, including the design of a custom tank, and the integration of an oil skimmer for active oil removal, Oil Skimmers, Inc. helped the injection molding operation eliminate $130,000 in annual wastewater disposal fees and cut down on man hours dedicated to the problem. According to the facility manager, the SAS Tank oil water separator paid for itself within three months of operation.

“It's really been a lifesaver,” concludes the facility manager. “With the oily water problem safely in the background we can finally get back to work and focus on our principal objective of making top of the line agricultural and industrial bins!”