As Fracking Booms, Oil Skimming Solutions in Wastewater Management Prove a Key Piece of the Puzzle

“Fracking.” We are all familiar with the term in one way or another as it’s been one of the most discussed and debated media topics as of late. From articles and news segments with titles such as Fracking Draws Support From Unions As Jobs Flourish, Worrying Environmentalists to A Real American Story: Why the Fracking Revolution Happened Here, the “fracking” or “hydraulic fracturing,” conversation is broad.

And, the business is vast. The American Petroleum Institute (API) estimates that there are more than 1 million fracked wells throughout the U.S. and that roughly 80 percent of natural gas wells drilled in the next decade will rely on the popular and effective shale oil and gas extraction technique. (http://cewc.colostate.edu/wp-content/uploads/2012/02/ei_shale_gas_regulation120215.pdf)

Fracking has become an extremely important facet of the future of the U.S. energy industry as technological innovations, coupled with abundant shale plays have left the U.S. rich with natural gas and oil. So rich, that the U.S. is said to hold 2,543 trillion cubic feet of natural gas in reserves labeled as recoverable, according to the U.S. Energy Information Administration (U.S. EIA). (http://www.eia.gov/forecasts/aeo/pdf/0383(2012).pdf)

So, what is fracking and where does oil skimming fit in? Fracking is defined by the oil and gas industry as the process of injecting fluids to create underground fractures. It is used for formation stimulation to retrieve trapped oil or gas located in underground shale reservoirs and water is a vital element of the technique.

“Fracking fluid,” a solution comprised primarily of water, along with sand and chemicals, is pumped into the well at a high pressure. The amount of water required per well, according to a 2009 report from the Groundwater Protection Council, ranges from 2 million to 4 million gallons on average, depending on the basin and formation characteristics. Upon the completion of stimulation, a portion of the fracking fluid can return to the surface as “flowback water.” (http://www.gwpc.org/sites/default/files/Shale%20Gas%20Primer%202009.pdf)

Additionally, throughout the hydrocarbon extraction or “production” process, water that is present within the reservoir may also surface. This water is known as “produced water” and can consist of natural formation water and other naturally occurring substances. The U.S. Department of Energy reported in a 2013 newsletter that the nearly 1 million fracked wells in the U.S. generate approximately 21 billion barrels of produced water each year. (http://www.netl.doe.gov/File%20Library/Research/Oil-Gas/epnews-2013-fall.pdf/epnews-2013-fall.pdf)

All of this water must be properly managed and either permanently disposed of via deep-well underground injection, reused in current or future fracturing operations or recycled for alternative uses such as other water supply areas. Wastewater management presents a unique opportunity: Hydraulic fracturing wastewater often contains traces of oil that can be collected and sold for added profits.

For many, oil skimmers have proven to be a cost-effective and reliable means to capitalize on these added profits.

Recovery of “dispersed oil” begins on the oilfield site with the initial treatment of the flowback water. According to an educational video series from Chesapeake Energy Corporation, Chesapeake pipes flowback water to above ground steel tanks sealed by double containment for temporary holding where it is later filtered and recycled. In this case, any oil present is likely recovered at the offsite treatment or disposal facility. (http://www.chk.com/Media/Educational-Library/Videos/Pages/default.aspx)

The next opportunity for recovery is within the produced water that emerges during hydrocarbon production. Energy companies may use a process similar to Chesapeake’s which, according to the video series, entails a system of baffles within a separator or “production unit,” followed by a heated three-phase gravity separator or “heater treater” for further separation. Once separated, the recovered oil and wastewater are sent to onsite stock tanks for temporary storage. The oil is later transported for sale and the wastewater is sent to a disposal facility, re-used or recycled.

However, full recovery doesn’t always occur on the oilfield. Flowback and produced water that is temporarily held in onsite stock tanks, even after processing, often still contains residual amounts of oil and solids. To the companies receiving this wastewater, oil skimmers have a nearly immediate return-on-investment and deliver continual cash flow through the ongoing sale of the recovered oil.

Specifically, tube-based oil skimming solutions have proven to be a reliable and cost-effective method of oil recovery for companies in West Virginia, Texas and Ohio, in which the use of tube oil skimmers has led to added monthly profits of $3,000 to $18,000.

Why the tube?
With floating, tube-based oil skimmers, the oil floating on top of the wastewater can be swiftly collected because the tube floats up and down with the wastewater level. This allows for continuous operation, day or night, and with the tube’s sleek design and durable construction, it can easily maneuver around any debris found in the water, which in this market, is key.

Tube-type oil skimmers have been delivering added profits to those in the oil and gas industry for more than 40 years. In today’s age of the “fracking boom,” the popularity of oil skimmers is growing immensely and the associated value they deliver is becoming more and more apparent. 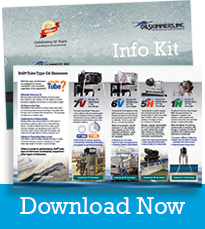 Read more on how oil skimmers are creating opportunities and driving bottom lines in the “Recovering Hydrocarbons from Hydraulic Fracturing Wastewater” White Paper.