Editor’s Note: This post was originally published in 2013 and has been updated for comprehensiveness.

Metaldyne Corp.’s Hatebur Operations in Royal Oak, Mich., produces driveline and transmission components at a rate of 120 parts per minute. To keep pace with demand, the plant can’t affordt extended downtime because of inefficient equipment.

Unfortunately for Metaldyne, the plant faced a problem we commonly encounter in the oil-skimming business. Metaldyne’s oil water separator frequently clogged and was extremely inefficient.

“The system required a lot of maintenance because the separator kept clogging up,” said Ken LaBruyere, project planning manager for Metaldyne Royal Oak – Hatebur Operations. “Our employees had to manually clean out the separator, which was causing a lot of separator downtime.”

Companies traditionally use separators that employ overflow skimmer pipes or weirs. While these methods are inexpensive, slotted pipes and weirs have inherent problems because there is always oil on the surface of the separator.

Manufacturers have also depended on outside removal firms to pump off the separated oil. Oil-removal services such as vacuum trucks are effective in removing the layer of oil, but they’re expensive and collect a lot of water along with the oil. They’re also needed continuously, which creates an ongoing expense for industrial users.

Why Continuous Oil Removal is Critical

Without continuous removal, companies face several issues that can impact cost and efficiency, including: 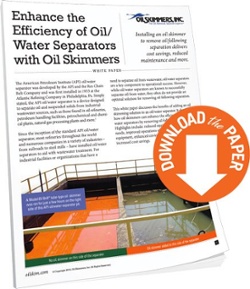 Companies have successfully addressed these issues by implementing floating-tube oil skimmers to eliminate the excess oil. The floating-tube oil skimmer uses a specially designed collector tube, which floats on the surface of the water. Oil adheres to the outside of the closed-loop tube, which is continuously driven across the separator’s surface and through a set of scrapers that remove oil.

The oil then drains into a collection tank. The looped tube is long enough to cover a large skimming area and requires little maintenance. A number of mounting systems are available for these oil skimmers, which allow them to be easily retrofitted onto existing oil water separators.

Metaldyne implemented a similar system to overcome its oil-collection challenges. The company operates fully automated, horizontal hot-forming machines to produce driveline and transmission components. Hot-rolled bars enter at one end of the machine, which heats, feeds, cuts off, forms and pierces forgings along the conveyor in a single pass.

As part of the forging process, Metaldyne uses water to wash the ends of the hot-rolled bars and to cool the dies. The plant also uses oil to lubricate the forging equipment. Throughout the process, the plant collects excess water and oil in a pit below the machines.

Metaldyne wanted to reuse the water and salvage the oil, while improving its overall manufacturing process. The company initially installed a floating oil skimmer separator system, which pumped oil into an aboveground separator. But the company quickly realized the system was high maintenance and unreliable because it didn’t always remove the excess oil from the water.

Dissatisfied with the performance and maintenance costs of the initial floating skimmer-separator system, LaBruyere investigated a variety of oil-skimming systems. The company settled on Oil Skimmers’ Model 6V unit.

This oil-recovery system operates unattended 24/7, removing as much as 100 gallons of waste oil per hour and decants it into a drum. Now, the oil Metaldyne recovers is nearly water-free.

Extend the Life of Plant Equipment, Eliminate Maintenance with the Tube

Metaldyne eventually selected nine oil skimmers for its facilities, which it incorporated along with a specially designed mounting system at the base of its Hatebur machines for oil recovery. For Metaldyne, a key benefit of the system was the ability to extend the life of plant equipment. This is particularly true for manufacturers recycling water used in the cooling process.

These companies must remove all of the oil before reusing the water. If the oil is not completely removed, contaminants in the water could shorten the life of the components or machinery. An effective oil skimmer should minimize or eliminate the maintenance issues many manufacturers face with contaminated water.

Since deploying the Model 6V unit, Metaldyne has not experienced clogging and parts maintenance problems it encountered with alternative skimming systems. You can read the full Metaldyne Corp. case study here.

Ready to see what skimming can do for your organization? Contact Oil Skimmers to discuss a custom solution to your oil problem.