Removing Oil Early – What It Means & Why It Pays 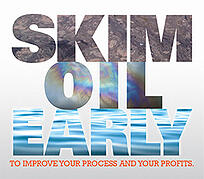 Editor’s note: This post was originally published in 2014 and has been updated for comprehensiveness.

Skimming oil early refers to removing oil as close as possible to the point of origin—ideally, where oil first enters the wastewater stream from the process that generates it.

The earlier you skim oil, or grease and fats, the more benefits you’ll see. Early oil removal can result in cost savings you might not have considered possible before now. By removing oil early, you can lower your water bills, lower your wastewater treatment rates, and see increased efficiency. You may even reap a handy payback if enough oil is recovered for reuse, or to be sold.

Read on for five use cases in which skimming early paid off.

Installing a tube skimmer helped one automotive parts supplier save money on water bills while improving the efficiency of its forging operation. By skimming oil during the manufacturing process, instead of downstream, the company reduced fresh water bills and extended the life of its coolant mix.

The excess water and oil that drain from the plant's hot-roll bar washing process and its die cooling process collects in a pit below the machines. The company chose to install a tube oil skimmer at this point. The skimmer was mounted on one side of the pit where it extracts the oil from the cooling water. The water gets recycled back to the manufacturing process where it's reused for cleaning and cooling.

Then, instead of paying for waste oil disposal, the company positioned a drum to collect the extracted water-free oil—as much as 100 gallons per hour—and began reusing it at the plant.

An office equipment manufacturer installed an oil skimmer where it could do its work before problems could arise. As a result, production time and wastewater treatment costs were reduced. In addition, the need for an expensive chemical solvent was eliminated.

The company had been washing parts to remove protective coatings that were applied by the steel manufacturer. The lubricants used on dies and equipment had to be washed off, as well. Lubricant oils kept building up in the parts washer, requiring personnel to monitor the solution. If chemicals weren't added in time, a slippery film would cling to the metal surfaces causing problems when the parts reached the paint shop. Because the paint would not adhere, the parts had to be re-cleaned. This caused costly rework and production delays.

Installing a tube skimmer at the parts washer solved all these problems. Locating the skimmer at the washing and cooling phase of the manufacturing process resulted in oil-free parts ready for painting and eliminated the need for chemicals and frequent recharging to break up the oil in the washer.

Fat from the frozen cooked chicken that the company processed would result in large slugs of oil that clogged up the company’s wastewater treatment system. Plant personnel had to add chemicals to break up the oil and, on occasion, make mechanical repairs. When an increase in production compounded the oil-related complications, plant officials decided they had to find a new solution. By skimming the oil from the wastewater before it entered the lift stations, they effectively eliminated the cost of chemical treatment downstream and avoided delays and costs caused by unscheduled maintenance.

An oil and grease manufacturer was preparing for an Environmental Protection Agency (EPA) inspection of its wastewater treatment system. Company officials were determined to obtain approval following the agency's first review. They installed a tube oil skimmer that not only removed oily residue, but also left the water clean enough to meet EPA requirements for discharge.

When the EPA arrived, the company was ready. To further prove the effectiveness of the tube oil skimmer, they had set up a goldfish aquarium to receive the recycled the discharge water from the separation tank. They passed close inspection with flying colors.

When oil is skimmed earlier, at the point of origin, it has less opportunity to emulsify and it's easier to collect. This helps retain the quality and value of the oil so it can be reused or recycled on-site or sold.

Industries that produce biodiesel, soap or animal feed may be viable prospects for your spent oil. For example, a potato chip manufacturer began skimming oil from its wastewater stream to improve the efficiency of its wastewater treatment equipment. The skimming solution was a success. As an added benefit, the manufacturer found a market for the discarded oil in companies that make biofuels. The company sold the oil and generated new revenue while diverting some 8,000 gallons of discarded oil from landfills every month. 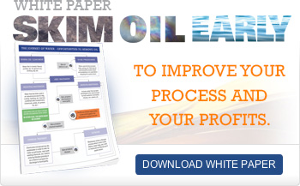